Official what Black (Red) Tea Are You Drinking Right Now?

One of the intentionally aged teas, Pu-Erh has a loyal following. 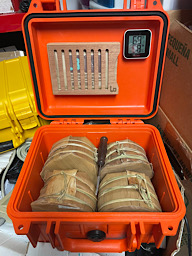 I'm new here so pardon if this has been gone over and I didn't find it in the archives... I've started down the Pu'erh rabbit hole, and, well, rabbit holes being what they are, I went a bit overboard and ordered rather a lot of tea from a few recommended places.

I don't want it to dry out before I get to drinking it, and I'm also an embedded engineer, so I thought I might make my own pumidor to at least give it a shot. However, I don't really have much in the way of cabinet building skill, and I don't really have a good spot in my house to put something like that that's not either highly variable in temperature, too dry, or too smelly (the laundry room would be a good candidate if not for the detergent odors).

But then I remembered Pelican cases aren't actually all that expensive, and people do use them to some success as portable cigar humidors (generally with Boveda packs) because they're also airtight, so they should maintain humidity pretty well. Couple that with a Bluetooth-capable hygrometer, and I should be able to outfit a small pumidor or three for small-scale collection that I don't have to open up all the time to monitor.

I've already got one sitting prepped while I wait for the bulk of my tea to come in (I double-checked common 200g/357g dimensions to make sure they should fit), but does anyone have any experience with this? It seems I'm lucky that cigar storage RH ranges mesh pretty well with tea ranges for aging (and the ones they have for... other plant material look like they should line up well with non-aging tea storage), but I'd be very keen on knowing if there are pitfalls I should look out for.

Well, so far it’s worked okay. I got three cases: two 1300s (orange and yellow) and a 1400 (yellow). I’m considering adding one last one later, but I don’t really have enough tea at the moment to justify that.

In any case, they’ve worked pretty well. I got some mounts for the Boveda packs, which has honestly been the most hit-or-miss part of the process; the adhesives that come on the magnets and metal plates don’t deal terribly well with humidity, ironically. I just got some 3M VHB Low Surface Energy friendly tape (the polypropylene shell is a low surface energy plastic that has troubles with a lot of tapes), so I’ll see how that holds up, but the bright side is that the mounting is really more cosmetic than anything.

I’m still a little iffy on the cedar mount; it makes sense for cigars, and it’s not a *lot* of cedar, so I doubt it’ll throw the flavor off much, but only one of the the three is cedar, the others are metal.

They hold the moisture pretty well, generally within a percent or two over the course of the day, and the measurement recovers within a few hours after opening one. So far, it seems like a success; my favorite part of the little BLE thermo/hygrometers is the nice detailed log of temp/humidity over time.

By the way, I saw an old post about it, but I thought I’d throw in some cake measurements in case anyone else is trying to plan similar experiments and needs to know the interior case dimensions. Most of these (not all, especially the 357g ones) are white2tea cakes, so there may be some variance from other tea companies. All measurements inclusive of wrapper, since I generally don’t store them unwrapped. Thickness is at the peak of the cake, though you may be able to get slightly more stacking efficiency out of them due to the divot in the back.

Alas, I don’t have any full-size tongs to measure here, and I didn’t measure any of the one-offs; I’ll probably throw in some of the more common mini stacks from white2tea as well a bit later, since I have them in another case and it’s nice to know how big they are in a stack for storage.

fraveydank wrote: Alas, I don’t have any full-size tongs to measure here, and I didn’t measure any of the one-offs; I’ll probably throw in some of the more common mini stacks from white2tea as well a bit later, since I have them in another case and it’s nice to know how big they are in a stack for storage.

Well, I got some more tea. I separated most of the shu into the orange 1300 case and the younger sheng into the yellow 1300; the somewhat older sheng and the larger shu (one 357g and the Waffles, which is the same diameter) went into the yellow 1400 until I can get a larger orange one, which I need to do before I get the additional tongs which are on their way. This one’s getting a bit crowded.

6FE16B46-9825-44D1-914F-ACDBE3967FEB.jpeg
If anyone is curious, the 5x200g white2tea tong here measured 13cm high by 14-15cm wide (again, not perfectly circular). I reshuffled it again to store the cakes a bit better after this picture and turned the tong on its side, which allowed me to organize it slightly nicer, but it winds up colliding with the Boveda holder (which is fortunately magnetic, so I was able to turn it, but that’s not a great solution long-term). The 1300 has an interior height of 15.5cm, as do the 1450 and 1500 (notably, the 1400 is shorter, so no tongs in there).

I’m probably going to order a 1550 (which will have a bit more headroom) for the larger shu storage, since I’m hoping to get a few more tongs over the next few months; it should have adequate space for six 5x200g tongs plus possibly three cakes in between.

I was provisionally interested in the 1560, but it has wheels and the case intrusions might interfere with the storage space. The Air 1557 looks pretty close and compelling, but it would have an inconsistent look with the rest of the Protector cases; I might think about it if I wind up with more 357g cakes, though, because it can store those on end.
You do not have the required permissions to view the files attached to this post.