Puerh for sale - Essence of Tea and more

How to brew the most potent tea?

Any tea drinkers in Singapore?

An old tetsubin in the Internet

Hoping to learn my next lesson: Are these decent entry level?

What are those little fluff balls that you get in longjing? Maybe my imagination is failing me, but I can't figure out what part of the teaplant has fluff balls and why you only find them in longjing....

Here is a picture of what i mean. Those little white fluff balls almost look like spider eggs. When I first found them I thought they were spider eggs (was a little put off at the time), but I eventually figured out that they were plant material. Picture has some pretty crappy longjing but lots of those balls. I imagine they normally try to pick them out and thats why I usually find a few.

I have NEVER had those fluff balls in LJ in 12 years of drinking it. Dang, they do look like eggs.

uhh..ive had quite a bit of Long Jing from bad to good..i too, have never ever seen anything close to fluffballs........

The picture is not tea that I've had. I was just searching through some teas online and I found that pic (the tea in that pic is very low quality...bits and pieces).

I've gotten those fluff balls in longjing I've bought in china and stuff I've gotten from tao bao. Ive gotten it in yi-ji and te-ji which are both good leaf quality ratings. Usually early/first harvest stuff. Makes me think it is something related to flowers or leaf buds. Usually much fewer than that pic. I don't think I've ever ordered longjing from american sellers.

Here are a couple more pics with fluff ball ratios more similar to tea i've had. 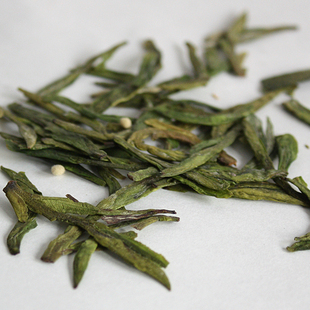 I have had fluff in LJ, some varietals are somewhat pubescent, but not the balls ... A better LJ will be hand picked and would not likely have advanced enough in season's growth to have flower buds.

I like fluffy teas. Particularly fluffy biluochun.
I'm guessing it is a phenomenon of pre-qingming teas. I am totally guessing though. Has anyone else experienced these? Have you had mingqian longjing without fluff balls?

I've had longjing without the fluffballs, but i didn't know anything about the teas.

Chip wrote:I have NEVER had those fluff balls in LJ in 12 years of drinking it. Dang, they do look like eggs.

Ahh, that is the difference between the male and female leaves.

Wait...are you saying that those are female leaves? Or did that go over my head....

I'll call some of my friends in Hangzhou and ask, but I have never seen anything like that in Longjing Tea.

It's result from machine processing. Usually if you see many of them, the tea is machine processed. However, I've never seen so many fluffy balls in such small amount of tea in the first picture. That's too much and doesn't look normal. The other pictures look quite normal. The first picture, it almost look like some one hand-removed a lot of leaves from the pile and left a lot of balls there.

The hand-processed long jing doesn't have such fluffy balls, or very few, and not in perfect ball shape. The balls themselves are nothing bad. They are just from the silver tips of the leaves. In early spring leaves, the silver tips are heavy, and there will be quite some fluffy balls in machine processed tea.

Hand processed tea is not always better than machine processed. The Long Jing in Beachape's later 2 pictures (especially the last one), whether Xi Hu Long Jing or not, looks like good tea, at least from the picture.

P.S. I took one more look at the first picture, and am almost sure it's the Huang Pian (yellow flakes) of Long Jing - meaning it's the picked-out older and crushed leaves of Long Jing. So I believe it's a by product of Long Jing - after good leaves are removed, the fluffy balls and crushed leaves are left. Nothing bad about Huang Pian. It's daily drink of many Long Jing farmers. A farmer I know sells the new Huang Pian of this year for roughly $4 per 500g. I won't pay the shipping cost to buy it, but I know it's still so much better than "higher end" Long Jing teabags

Obviously all the hand-processing pan fry workers are male. And females must be operating frying machine

Thanks! Now I get what teadoff was saying. I guess I am still having trouble imagining what part of the plant they come from. You mentioned that they are from the snowy tips of the buds. I could imagine how the fluff from the leaves would get rolled up in a machine. But the fluffballs I've seen don't look like it has been rolled. Looks more like those fluff balls on willow branches. I'm sure that I've had lots of machine processed tea before but I've only seen those in longjing. Sorry for beating a dead horse.

Dryer lint: think of the fuzzy silver needles tea fuzz, being rubbed off the longjing leaves.